Once again, XKCD nails it. 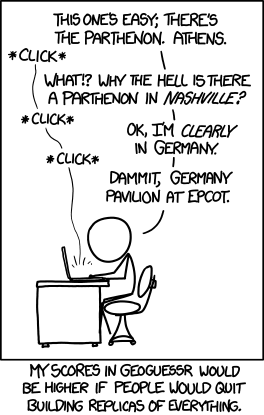 The Wall Street Journal has an interesting, spatially relevant article on regulation and standardization of place names and the disappearing apostrophe in U.S. signage, “Theres a Question Mark Hanging Over the Apostrophes Future: Its Practically Against the Law to Use the Mark in a Places Name; Sorry, Pikes Peak.”    Read the title again to catch the humor that Barry Newman uses to construct a brief history of place signage.

He states that the U.S. is the only country that standardized out apostrophes because they were seen as conveying private ownership of a public place. The USGS Board on Geographic Names set up in 1890 by President Harrison has eradicated around 250,000 apostrophes from federal maps. In contrast, the Apostrophe Protection Society kept the Mid Devon council in England from banning the use of apostrophes in street signs.  According to an in-depth article on the loss of the apostrophe and the history of Fell’s Point or Fells Point, Maryland, “What’s the Point?” from the Underbelly: From the Deepest Corners of the Maryland Historical Society Library, only five natural features have official license to use the possessive apostrophe in 2013.

The quoted arguments for the apostrophe is that it is part of proper English language usage, that it connotes information about the history of a place, and that not using them can cause confusion and miscommunication. What is most interesting about the WSJ article is who isn’t quoted – cartographers. How do cartographers feel about the vanishing apostrophe in place names?

Posted by: Barb | on May 16, 2013
Posted in Cartography, general, Political Geography, WebMapping | 1 Comment »

It’s all well and good you can rattle off that most of the worlds population is in Southeast Asia. However, conceptualizing that is sometimes really challenging. It’s almost too abstract. That’s why this graphic is so amazing – more than half the world’s population lives inside this ‘circle’. That’s AMAZING! That tiny little circle encompasses the majority of the human population. The visual is just staggering.

April 15, 2013 is Tax Day in the U.S. when state and federal taxes are due to the Internal Revenue Service (IRS) or state tax offices. By it’s very nature, taxation is highly geospatial. According to an article on the history of U.S. property tax in The Assessment Journal, property taxation has existed in the U.S. in basically the same form since colonial days because of “the relative ease with which land and  buildings can be located and identified, and their stability over time”. It continues to be the largest single source of autonomous local revenue for most cities and towns. President Lincoln passed the Revenue Act of 1861, during the Civil War Congress, but it  wasn’t official until the Revenue Act of 1913 was signed by President Woodrow Wilson on Oct. 3, 1913 as part of the 16h Amendment, making the Internal Revenue Code 100 years old.

While being a property tax assessor is still a field work heavy job, in the past several years, many local municipalities are moving towards interactive maps,  computer assisted mass appraisal for property taxes and online tax maps.  Residents have come to expect to be able to access tax parcel viewers, but moving to an online system, like many municipal projects, takes time and money. Many county assessors are becoming expected to have GIS skills and training. According to the U.S. Bureau of Labor Statistics most appraisers and assessors have an associate or bachelor’s degree, must be certified by their state, and earn about $50,000/yr. In 1913, an assessors salary couldn’t exceed five cents for every $1,000 appraised, according to A Treatise on the Federal Income Tax under the Act of 1913.

Posted by: Barb | on April 15, 2013
Posted in Cartography, general, Human Geography | Comments Off on U.S. Taxes and GIS

The ZSL London Zoo‘s annual census of every zoo animal as part of their zoo license renewal is an example of how to turn a seemingly routine geospatial task into international news. The media and public discuss the event in a way that evokes the celebration of an annual holiday like Ground Hog’s day. While the zoo keepers use clipboards to count each animal in the field,  it is logged into the International Species Information System (ISIS) software to manage international breeding programs for endangered animals from zoos around the world.  ZSL London Zoo participates in breeding programs for 130 species. An interactive map on the ZSL London Zoo website gives visitors an idea of the animals being counted during the census. It is a great way to highlight the work of everyone involved and introduce them to aspects of zoo management beyond watching animals.

The Zoological Society of London opened the London Zoo as the world’s first scientific zoo in 1828 and continues to add new technology, innovations, and discoveries as they develop.They award a scientific medal, like the one awarded to Prof. Simon Hay for his work investigating the spatial and temporal aspects of mosquito born disease epidemiology and manages the Malaria Atlas Project to improve cartography of malaria.  It is one of several different divisions that fall under the Zoological Society’s umbrella including the Whipsnade Zoo and the ZSL Institute of Zoology. The Zoological Society utilizes geospatial professionals in capacities from Dr. Chris Yesson‘s work on phyloclimatic modeling and classes in GIS to field scientists using remote sensing data donated by GeoEye for gorilla conservation. The ZSL created the EDGE Evolutionary Distinct & Globally Endangered program as a global conservation effort to protect species with unique evolutionary history using Google Earth to create awareness and interest. The ZSL encourages partnerships, collaborations, and opportunities for citizen science and volunteers on their website.

Posted by: Barb | on January 5, 2013
Posted in Cartography, Education, general, Remote Sensing, Software | Comments Off on The ZSL London Zoo

I recently got an Ipad Mini and started to look for free books to download from Kindle, Google, Project Gutenberg, and the many other free resources that are available online. Once I started looking for geospatial and geography related books the list became almost mesmerizing. I found old books from “Home Geography for Primary Grades”  in Google ebooks to The Atlas of Ancient and Classical Geography by Samuel Butler in Project Gutenberg.  Some of the books are good examples of traditional cartographic methods such as “Terrestrial and Celestial GLOBES: Their History and Construction Including A Consideration of their Value as Aids in the Study of Geography and Astronomy  which was scanned in to Project Gutenberg.  Kindle ereader and Project Gutenberg both have copies of  “Geography and Plays” by Gertrude Stein, which is written in the then modern style of the 1920’s about different countries around the world. Exploring the old geography books online is a fun way to spend an afternoon.

If you are looking for something more recent, Google ebooks and Google Scholar provides a significant number of chapters for more current books and journal articles on GIS and geospatial technologies including from 2013. Google Scholar also includes a patent search, legal documents, Federal and State courts. This is interesting reading even if it isn’t specifically in your industry, because you might just come across a new area of interest.

I was told by my local Hallmark Store that this is the last year that Hallmark will  be making the Barbie series of ornaments including the Geography Teacher Barbie Ornament. It is called the Student Teacher Barbie Ornament but she is carrying a geography textbook, has a map pointer, and it comes with a globe background (circa 1965).

If you are more of a do it yourself ornament maker, Maps.com has directions for an origami globe ornament,which would be good as a project any time of the year. If anyone has used the smashed orange to teach map projections, as recommended in many geographical literacy toolkits, this would be another good activity. Posted by: Barb | on December 6, 2012
Posted in Cartography, Education, general | Comments Off on Last year for the Hallmark Geography Teacher Barbie Ornament

The Telegraph UK has an article on England’s Green Belt which provides an interactive Google map for residents to determine if they are in an area classified as green belt land. The most interesting part of the article is that it makes the data available to the public and states that in the past the data would have cost thousands of bounds despite the fact that it is funded using taxpayer money. It then provides a link to the downloadable data provided by The Department for Communities and Local Government.  This is a common debate among the GIS community, but not one that is normally brought up in popular media. It will be interesting to see the comments left by the public about the article and if the topic of available data comes up.

Posted by: Barb | on November 28, 2012
Posted in Environmental, general, WebMapping | Comments Off on Interactive Greenbelt Map

The Wall Street Journal today has an article on map auctions coming up in December titled, “Here be Dragons – and Map Lovers“.  The maps, globes, and other cartographic items they list sell for several thousand to several million dollars. One collector says that he spends up to 10% of his income on map collecting. According to the Barry Lawrence Ruderman Antique Maps Inc. most map collectors start out by collecting themed maps such as a specific geographic region, historical time period, or even type of cartographic style.  Geographaphicus, an antique map blog, says that one of the most frequent questions they get asked is how to determine if a map is authentic or a fake. This is a problem for collectors and also a staple plot device for literary novels and movies.

Antique maps have always made GIS users whistful and there are many requests on-line for how-tos on making a GIS map have more of the cartographic effect of an antique one, such as this post by James Fee from 2006 on creating historic map effects.  The Yale Map Library has a dated but thorough document on how  to do Classic Cartographic Techniques in ArcMap.  The real question is though, how will online and interactive maps stand up to antiquity? Will collectors be bidding on printed out versions of the maps we make today?

Heat Maps That Are Population Maps

Once again, XKCD.com ‘gets’ it.

Posted by: Frank | on November 24, 2012
Posted in general | Comments Off on Heat Maps That Are Population Maps